Now, it might not seem the most appropriate time of year to bring to you ladies attention a super bit of kit i had on test this early springtime. Forgive me for that, in part I have not gotten round to penning my thought on the item for a good month or two due to being busy and well, just out riding, and secondly, admittedly I only wore the garment from March-late April, so its not been at the front of my mind, however I have finally found time to share my thoughts on a top-tech jacket that most wardrobes will have space to accommodate.

Admittedly Capo is a brand I didn’t have a massive amount of awareness of until last year or so. Known widely state-side and down under, their kit is minimally and stylishly designed, you wont find cluttered logos or hideous colour-schemes in their line-up, just a well executed understated style. Capo produce a host of club and team kits in the states, and unbeknownst to me I was actually already in possession of a very comfy pair of armwarmers from their via the excellent Elcyclista. 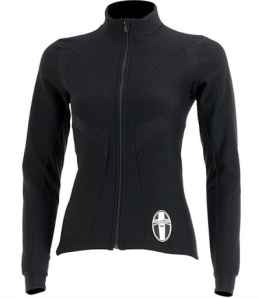 The jacket is an incredibly svelte number, crafted in a fabric Capo has termed ‘Shark’. Consisting of a thin but closely yarned fleece lining, backed by the exterior layer of a matted wetsuit-like windproofed lycra, the jacket is definitely on the ‘race-fit’ side of the fence, offering a really flattering profile when zipped up. Bonus points already! Think of it as the women-friendly equivalent of Rapha’s Pro-team jacket; a race-cut insulating outer layer designed simultaneously to afford a breathable and windproof front panel.

Reflective piping flocks the rear panel joints, but don’t make the mistake of thinking this is a high-vis piece, its stealthy and ninja-like with its completely black colour. Stylish attire indeed for the day, but this wont be ideal for commuting on darkened streets come evening time. Team with a high-vis gilet or such should this be the case would be my advice.

Two large pockets provide ample storage for ride food and phones/camera etc. No internal pump pocket or such, but they do keep their shape under load extremely well, and don’t sag in that unsightly way that other jerseys can be prone to.
The jersey is an ideal 3 season outer layer, teamed with either 3/4 or tights and a thick baselayer in the winter. Retailing at around £150 (although I have seen these floating about in online sales recently) the jacket is a minimally-stylish staple thats manufacturing quality means it should last quite a few seasons. I teamed it happily with the rapha 3/4 bibs during an extensive test throughout late March/early April and it performed admirably giving ample protection from wind and drizzle. Id say look to employ the jacket ideally at temperatures below 12 degrees or so.
Capo will also be involved the the really cool Rêve grand tour project, which sees a group of 6 US based ladies take part in a punishing 3479KM ride shadowing the 2012 Tour de France route. Hopefully the weather will stay nice enough for the gang they wont be needing the Cipressa jacket 😉
Capo is available in the following places